Miyuki is a ditzy and clumsy girl who is always followed by misfortune wherever she goes.

She loves making friends, and likes giving each of them an affectionate nickname. Miyuki always refers to herself in the third person.

Her best friend is Miho Shirayuki, who she nicknamed "Miho-pyon". She loves anything related to the cartoon character Grey-chan.

Her only known family member is her mother, who appears briefly in Dancing Summer Vacation. However, no image is showed, and the player can only hear her voice. 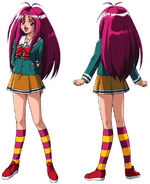 Add a photo to this gallery
Retrieved from "https://tokimemo.fandom.com/wiki/Miyuki_Kotobuki?oldid=4680"
Community content is available under CC-BY-SA unless otherwise noted.