She is reunited with the protagonist during the second year, when she is appointed as an education apprentice at Hibikino High School. After graduating, she became the protagonist's homeroom teacher. She teaches Japanese.

Although she is a caring teacher in front of her students, sometimes she reveals her true feelings to the protagonist. Like Shiori Fujisaki, who served as the main heroine in the previous game, Kasumi's ending can be quite difficult to get as she only appears during the second year of the game and the player has a limited amount of time to raise her affection.

She is in good terms with Hikari, and they often talk about past events like good childhood friends.

Her presence in the novel version becomes a impact on the relationship of Hikari and Takeru Iwase. 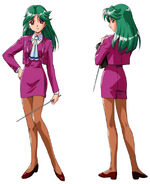 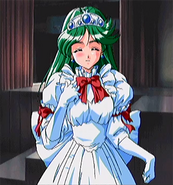 Kasumi disguised as Princess Melora
Add a photo to this gallery
Retrieved from "https://tokimemo.fandom.com/wiki/Kasumi_Asou?oldid=4915"
Community content is available under CC-BY-SA unless otherwise noted.