Homura is an energetic tomboyish girl, who loves video games and anime. In an attempt to make her a better student, the Principal appointed her as the Student Council President. Despite her lazy and nonchalant attitude, she will not tolerate bullying and will pummel bullies and delinquents (even if they're twice her size). She is best friends with Akane Ichimonji and arch-enemies with Mei Ijuuin.

Her only revealed family members are her grandparents, Ringo and Hitomi Akai. Her grandmother is already deceased, and her grandfather Ringo appears in Leaping School Festival. Homura is taking care of him. All her family members were graduated from Hibikino High School and were said to be very studious.

She also seems to have made enemies with Fubuki Tachibana and Natsumi Fujisawa, two members of Hibikino's Disciplinary Committee who appear in LSF. 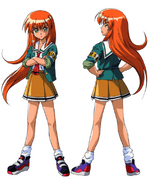 Homura disguised as Pastel
Add a photo to this gallery
Retrieved from "https://tokimemo.fandom.com/wiki/Homura_Akai?oldid=4911"
Community content is available under CC-BY-SA unless otherwise noted.