The protagonist's childhood friend, Hikari is a girl who always thinks with a bright perspective and is always in good spirits, but she was a crybaby as a child. She has athletic abilities and enjoys moving her body, and she is able to run the 100-meter race in 11 seconds.  She had long hair when she was younger, but cut it the day before entering high school, as revealed in Sidestories.

She lived next to Kasumi Asou and the protagonist and had a crush on him. Hikari never forgot him even after he moved. They were finally reunited in the entrance ceremony of Hibikino High School.

Her best friend is Kotoko Minazuki, whom she befriended during junior high school.

Hikari is easy to pursue, as her affections levels are easy to raise.

Many words and deeds you have Omoiya~tsu that the hero, there also be sometimes themselves actively action, we are happy that you want helps the hero. However, the main character is very easy to be damaged and has been friends with other girls, and it appears it becomes a bomb in the game story. Because the CD drama can not be the hero of Watase Kouichi advances at the same time the story with multiple heroine, casual behavior of Hikari is the main heroine, becomes a wall that can not be more than absolutely for other heroine approaching the Kouichi, it is of Kouichi scene that would the give up it was seen several times. 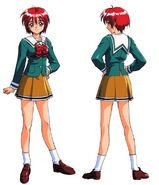 Add a photo to this gallery
Retrieved from "https://tokimemo.fandom.com/wiki/Hikari_Hinomoto?oldid=4879"
Community content is available under CC-BY-SA unless otherwise noted.