A hardworking girl from a poor family, Akane is cheerful and energetic. Her father and mother abandoned her and her brother when they were in middle school, forcing her to work many part-time jobs to pay for school--she is in fact so poor that she can only afford the school's summer uniform. Since she comes from a family of gang members and martial artists, she is physically formidable and can land powerful punches. She is skilled at cooking and housework. Her best friend is Homura Akai.

Her older brother is Kaoru Ichimonji, who oftens tries to sabotage her dates with the protagonist. She has mixed feelings about her brother and their relationship is complicated. Kaoru's subordinates refer to Akane as "big sister". Her father is on a journey to train, and her mother is following him. 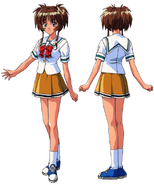 Add a photo to this gallery
Retrieved from "https://tokimemo.fandom.com/wiki/Akane_Ichimonji?oldid=4673"
Community content is available under CC-BY-SA unless otherwise noted.